A salute to General Anesthesia

The term "anesthesia" was coined in 1846 by the American physician and poet Oliver Wendell Holmes. The term has Greek origins and refers to the inhibition of sensation. General anesthesia is a medically induced state of unconsciousness accompanied by a loss of protective reflexes. The development of general anesthetics has enabled the execution of medical procedures, which would otherwise be too painful to carry out.

The earliest records of anesthetics dates back to 3400 B.C. where then the Sumerians cultivated the opium poppy. Around 2225 B.C. the Sumerian territory became part of the Babylonian empire, which extended from Persia in the east to Egypt in the west, resulting in dissemination of the knowledge and use of the opium poppy. Prior to the introduction of opium in ancient India and China, the civilizations used cannabis and aconitum, both potent hallucinogenic agents. Ancient Indian texts also advocated the use of wine with the incense of cannabis for anesthesia. 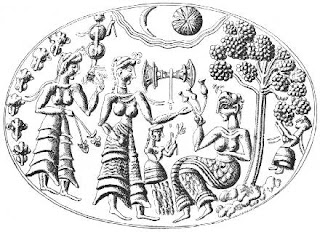 The Persian and Arabic physicians were the first to utilize inhaled anesthetics. Several of their records from the 9th-11th century describe the use of "soporific sponge", a sponge imbued with aromatics and narcotics which was usually placed under the patient's nose during surgeries. In England, a potion called dwale gained popularity during the 12th century. This was a potent mixture of opium, bile, and hemlock; the patients were usually revived by rubbing salt and vinegar on their cheekbones. Dwale became so ubiquitous that it was mentioned in several works of literature including Shakespeare's "Hamlet" and "Ode to a Nightingale" by John Keats.

The next improvement in the quality of anesthetics was made in 1525 during the Renaissance by Paracelsus, a Swiss physician and alchemist. Paracelsus noticed that ether ((C2H5)2O), when administered in "oil" form by mixing alcohol (C2H5OH) and sulfuric acid (H2SO4), induced sleep in chickens when it was incorporated in their feed.

He realized that ether was a potent analgesic. The use of ether as an anesthetic occurred much later; initially it was used for "ether frolics" mostly by medical students. Even today the exact mechanism of action remains unknown, although it is known that ether can suppress the nervous system. Ether is still used in poorer countries which lack elaborate anesthetic equipment. Ether is highly soluble in the bloodstream and therefore it can easily induce muscle relaxation. The primary disadvantage of using ether is that it is highly inflammable and can cause unpleasant side effects including bronchial spasms and vomiting.

In the 18th century nitrous oxide (better known as laughing gas) was discovered by the English polymath Joseph Priestly; the same Mr. Priestly who featured in a previous blog about carbonated beverages. To synthesize nitrous oxide (N2O), he heated iron (Fe) filings which were dampened with nitric acid (HNO3).

The analgesic effects of nitrous oxide were first observed by the Cornish chemist Humphry Davy who also coined the term "laughing gas". He had a chamber built where he would study the effects of the gas. Interestingly, his notebooks also suggested that he had succeeded in mixing the gas with wine as a cure for hangovers. Unsurprisingly, Davy eventually became addicted to laughing gas. Nitrous oxide has several advantages compared to ether: it allows rapid recovery, does not cause nausea or bronchial irritation, is non-flammable. Nitrous oxide is still used extensively especially in dentistry. The main limitation is that its administration requires expensive equipment. 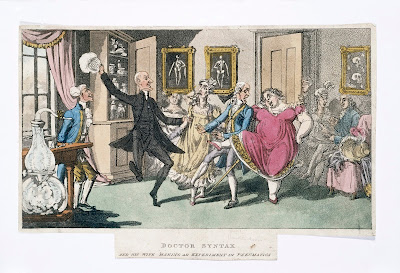 Figure 2: Depiction of a laughing gas party in the 19th century. Also known as hippie crack, nitrous oxide was frequently used recreationally in British upper class. It gained popularity due its powerful "mystical" and "spiritual" effects on the user. Source.

The use of anesthetics in surgery began in the 1820s. Henry Hill Hickman, an English physician, experimented with the use of carbon dioxide. He would administer the gas to an animal to the point where it became almost insensible and then he would determine the anesthetic effects by amputating its limbs. In 1824 he submitted his report to the Royal Society but was met with criticism and deemed a "Surgical Humbug". His work was later reexamined and he is now recognized as one of the fathers of anesthesia. The other pioneers Crawford Long, Horace Wells, and William Morton owe their eureka moments to ether frolics; all of them were regular attendees of these events. Crawford Long, an American surgeon noticed that the participants of the frolics would be oblivious to the pain of inadvertant bruises. In 1845, he became the first obstetric anesthetist by having his wife inhale ether while giving birth. Horace Wells, an American dentist pioneered the use of nitrous oxide as an anesthetic in dental surgery. Unfortunately, in 1845, during a demonstration at Massachusetts General Hospital in Boston, his patient cried out in pain during the procedure which prompted the audience of students to jeer at him. Humiliated, Wells returned home the very next day. The patient later admitted that although he had cried out in pain, he had no recollection of the pain or the tooth extraction. William Morton, also an American dentist, used ether for tooth extractions. His method became famous when an American surgeon, John Collins Warren, used ether to painlessly remove a neck tumor. Warren reportedly quipped "Gentleman, this is no humbug" after the procedure. Reports of this demonstration travelled across the world and ether quickly became the predominant form of anesthetic. 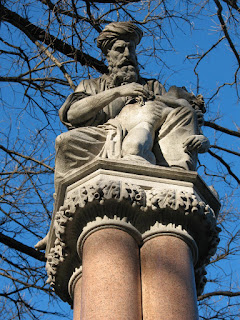 Figure 3: The Ether Monument in Boston's Public Garden. Also known as The Good Samaritan, the monument depicts a doctor holding the body of a drooping patient on his knee. The doctor holds a piece of cloth in his left hand suggesting the use of ether. Source.

In 1847, James Young Simpson, a Scottish obstetrician, discovered the use of chloroform as a general anesthetic. Dr. Simpson, along with his assistants, would sit in his dining room every evening and test new chemicals to see if any of them had anesthetic effects. On inhaling chloroform, an atmosphere of cheer set in followed by a loss of consciousness. The next morning, in an attempt to reproduce the results from the previous night, Dr. Simpson tried it on his niece. She fell asleep while singing the words "I am an angel!". Thereafter, he used chloroform extensively and its use spread rapidly through Europe. However, it was later abandoned in favor of ether due to its side effects which included cardiac toxicity.

The final class of anesthetics that are still in use today are barbiturates. These are a class of sedative drugs that are derived from barbituric acid. Barbituric acid was first synthesized and named by the German chemist Adolf von Baeyer in 1863. There are several interesting theories about why he called the compound barbituric acid, including the conjecture that he had named it after St. Barbara because he had discovered the compound on the feast day of St. Barbara (December 4th). His work was closely followed by Hermann Emil Fischer, a German chemist and Nobel prize recipient, and Joseph von Mering, a German physician. Together, they developed the first barbiturate, diethylbarbituric acid, in 1902. They realized that this compound could be used for treating insomnia, epilepsy, anxiety, and as an anesthetic. Unlike ether, nitrous oxide, and chloroform, barbiturates are administered intravenously. Barbiturates are still widely used because they cause smooth and rapid sedation. However, they can cause cardiorespiratory depression and tissue damage when not administered carefully. 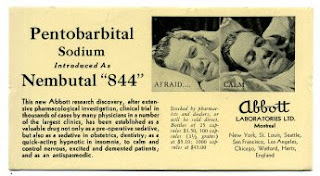 Figure 4: An advertisement from an American medical journal in 1933 highlighting the "short but powerful hypnotic effect and prolonged sedative action from a small dosage". Source.

The ideal anesthetic should be non-flammable, should dissolve easily in the blood stream, should not have any toxicity, and should not be an irritant to the respiratory system. Usually anesthetics are used in combination for optimum results. It is important to remember that there are inherent risks and drug interactions that are specific to each patient. Currently, there are a wide range of anesthetics that are used. They include derivatives of ether compounds, nitrous oxide, and barbiturates. These compounds can be administered either by inhalation or by intravenous injection.
at August 23, 2017