Genetically modified foods, also known as GM foods, are foods that are produced by organisms whose genetic material have been refashioned through genetic engineering. This process entails introducing new traits, that are an improvement over the parents, by means that do not happen naturally. The first commercial sale of GM food occurred in 1994 with the Flavr Savr tomato; the ripening process of the tomato was slowed down without compromising on flavor and color thereby allowing a longer shelf life. However, humans have been modifying plants for centuries to increase production, geographic range, palatability, and several other characteristics. What are the benefits of selective breeding, which has been used historically, vs genetic engineering? What are the problems, if any, that are associated with manipulating genes for our benefit?

The earliest records of plant domestication date back to 11,050 BC in Syria, where grains of rye with domesticated traits have been found. However, this event seems to be due to cultivation of wild rye rather than a conscious effort towards domestication. The bottle gourd seems to be one of the earliest domesticated plants; by 10,000 BC the domesticated version of this plant was used not only as food, but also as a container. Several crops such as peas and wheat were domesticated with the intention of increasing the size of the seeds and grains. This process, also known as selective breeding, allowed humans to improve the offspring by selecting desirable traits, and was an antecedent to the modern definition of genetic modification. This process lead to the development of crops that are now unrecognizable from the parent plant. 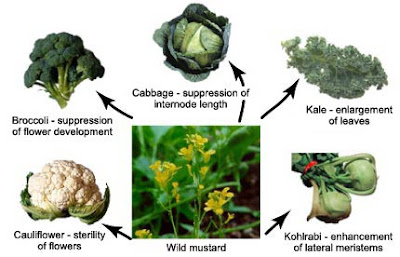 Figure 1: Although it is unclear when wild mustard was first domesticated, the selection of different traits gave rise to several morphologically distinct plants: kale was created by making the leaves bigger, selection of a thicker stalk made kohlrabi, selecting for flower clusters made cauliflowers, broccoli and cabbage were made from kale predecessors by selecting for large flower clusters and large terminal buds respectively. Source.

The process of selective breeding was vastly improved in the 1970s when it became possible to manipulate the genetic material of crops using tools that would only change the DNA of interest. The tools of genetic engineering included restriction enzymes, that could cut DNA in specific places, and DNA ligases, that could join broken pieces of DNA. Together, these tools are still used today to "cut and paste" DNA sequences from multiple sources resulting in the formation of recombinant DNA. This manipulated DNA can then be introduced into a an organism by several methods. In plants, those methods include using gene guns, electroporation, and microinjection, which involved shooting the DNA into the plant cells, using electric pulses to introduce the DNA, and directly injecting the cell with DNA. Another common technique that is used to introduce genes into plants includes  Agrobacterium tumefaciens-mediated transformation. Agrobacterium tumefaciens is a common plant parasite which inserts its genes into the plant host as a part of its infection cycle; this phenomenon is thus used to introduce desirable foreign genes into plants.

The first genetically modified plant, an antibiotic resistant tobacco plant, was produced in 1983. Why create such a plant? The process of introducing a gene into another organism is complicated and is associated with a high risk of failure. There is no guarantee that the gene of interest has been correctly incorporated into the host. Therefore, additional marker genes are used. These genes usually code for antibiotic resistance or herbicide tolerance. This allows for the screening of plants to identify the ones which have successfully integrated the new DNA; the plants which have the new DNA can withstand treatment with antibiotics or herbicides, whereas the plants which do not perish when treated with the same. However, incorporating such genes can have other adverse effects which have been discussed below. As previously mentioned, the Flavr Savr tomato was the first genetically modified food; it was developed by introducing an antisense gene that helped in delaying the ripening process. 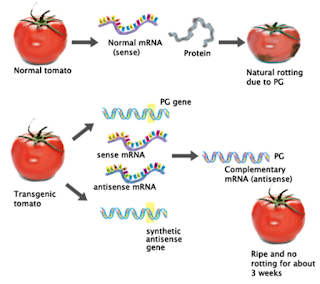 Figure 2: The mechanism of the antisense gene used in Flavr Savr. In regular tomatoes, the sense mRNA encodes a message that leads to the production of the protein polygalacturonase (PG). This protein leads to the softening of the tomato, thus making it more susceptible to fungal infections, However, in the Flavr Savr tomato, the synthetic gene that has been introduced codes for antisense mRNA; this in turn pairs with the sense mRNA, thereby inactivating it and preventing the formation of PG. This leads to longer shelf lives. Source.

Following this, there were several GM crops that were developed including canola which had a modified oil composition, virus-resistant squash, and the Bt crops: Bt cotton, Bt maize, and Bt potato. These Bt crops were all developed in 1995-1996 and became popular because they reduced the need to use chemical pesticides.  The crops contained genes from the organism Bacillus thuringiensis or Bt, which produces crystal proteins that are insecticidal. The mechanism of death is quite gruesome- when ingested by certain insects, the protein crystals dissolve in the insect gut, and paralyze the digestive tract. This causes the insects to stop eating and they die of starvation. In 2000, golden rice was created in order to supplement the diets of Asian countries with vitamin A the deficiency of which kills around 670,000 children under the age of five each year. The modified rice was improved in 2005 to produce 23 times more beta-carotene, the precursor of vitamin A, compared to the original golden rice. Currently, about 28 countries produce GM foods, with the U.S. being the leading producer- cotton, soybeans, and corn are the major GM crops that are grown.

Humans have had a long history of genetically manipulating animals through domestication. Dogs were domesticated atleast 15,000 years ago as companions. Sheep, goats, and cattle were domesticated for their meat, while horses, oxen, and camel were used to transport goods, and silkworms and honey  bees for the commercial value of silk and honey. The process of domestication also involved selective breeding which allowed for the selection of favorable characteristics; dogs were selected for their behavior, sheep for their long, lustrous wool and so on leading to the development of traits that made the domesticated animals completely distinct from their wild counterparts.

The process of genetically modifying animals using genetic engineering has only recently shown results; very few of these animals can actually be used as food. In 2002, researchers at Caltech created glow-in-the-dark mice by using a jellyfish gene that coded for green fluorescence. The gene was introduced into the mice though a virus that infected the mouse embryos and transferred the gene into the DNA of the embryos. Following this experiment, other animals were also used to express similar fluorescence proteins. In the same year, researchers successfully designed a protocol to enable mammalian cells to secrete the protein filaments that constitute spider silk. The resulting silk is not only flexible and lightweight, but also possesses higher strength and toughness. This idea was inspired by the fact that spiders are highly territorial and setting up spider farms was therefore difficult because they would end up killing each other. Armed with genetic engineering, scientists were able to introduce the genes required for synthesizing spider silk into goats so that the goats would secrete the silk proteins into their milk, thus making it easier to harvest. Pigs have also been genetically modified to produce either super muscly pigs or tiny pet "micropigs". In 2015, AquAdvantage salmon became the first GM animal to be approved for food use. This salmon has accelerated growth rates and can breed all year round instead of only during spring and summer. Currently, researchers are working to use genetic engineering as a tool to reduce global warming- by producing cows that are less flatulent and therefore have lower emissions of methane, a potent greenhouse gas. 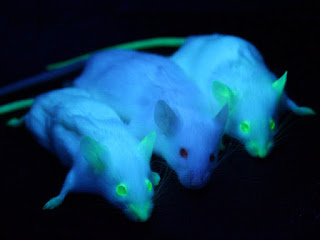 Figure 3: Mice that have been genetically engineered to glow in the dark; the central mouse is the wild-type aka the unmodified control. P.S. Googling glow-in-the-dark animals is an amusing pastime. Source.

The oldest argument, of course, is that the science is not well understood or regulated. Besides, there are several other concerns over the consumption of GM crops- they cause cancer, the long term effects remain unknown, they are "Frankenfood" and are unnatural, they contaminate the environment and increase herbicide use, and that they do not increase food yields and are detrimental to the effort of feeding hungry nations. Although some of these concerns are valid, the majority of them are completely misplaced beliefs. Genetic modification has been a crucial tool for understanding how biological systems work. Without this technique, it would be impossible to synthesize products such as vitamin B2, alcohol, mono-sodium glutamate (MSG), on an industrial scale. Each of these processes are dependent on micro-organisms that have been modified to pump out vast quantities of these products. Therefore it is untrue that manipulating DNA leads to the formation of Frankenfood, for example introducing anti-freeze  genes from Arctic fish into tomatoes does not lead to the production of tomatoes with fish tails. DNA is simply a language and can be manipulated to encode the required message without leading to aberrant results.

Many of the GM crops have been synthesized to be resistant to pesticides- a useful trait that should lead to the elimination of weeds without compromising the GM crops. However, the potential problem that can arise is that spraying the weeds with higher doses of pesticides will eventually lead to the formation of resistant weeds thereby rendering them immune to the effects of pesticides. In order to counter this problem, the EPA and the WHO investigate, monitor, and regulate the use of pesticides. To do so, a multi-pronged approach is used: the pesticides are evaluated every 15 years to ensure their safety on humans, farmers are warned against using higher pesticide doses, non-chemical pesticides are being investigated, and synthetic pesticides are being developed that are highly specific against a particular target pest.

It is true that the long term effects of these foods on humans are unknown- it is unethical to experiment on humans and understand what changes are caused by these foods. However, such long term studies have been done on rats, which have been shown by the scientific community to be acceptable models for humans. The studies on rats indicate that these foods do not cause an increased incidence of cancer, and do not affect the health or vitality of the animals in any way. Furthermore, they also do not effect the future generations, another concern voiced by the anti-GM advocates. Another cause for concern is that the use of GM foods make us more vulnerable to allergens. There are a few arguments that anti-GM advocates conventionally use. First, they believe that GM crops may produce new allergens. As described above, the only way to create GM crops is to purposefully manipulate genes. This means that there needs to be malicious intent to introduce genes encoding allergens. Second, the protein crystals in Bt corn can cause allergic reactions. This is again untrue because the proteins are expressed mostly in the leaves and not in the cobs. This means that the levels of these proteins that are consumed are insufficient to cause an allergic reaction.

The current scientific consensus is that GM foods are no more dangerous than conventional foods. There are several regulatory agencies in countries across the world that constantly monitor the effects of GM crops on the environment and human health. It is unfair to completely dismiss a new technology based on unfounded fears of the unknown. Although it is impossible to completely eliminate all the risks associated with GM crops, the benefits of these crops far outweigh any potential risks.