Viruses are infectious agents that can replicate only when they are inside a living host cell. To this end, they enter the cells and utilize the host cellular processes for their own benefit; conjuring up the image of an unwanted house-guest. Although they look nothing like Figure 1, viruses can be equally disturbing- they can hijack the host metabolic pathways to create new material, remain latent in the host for several generations leading to a chronic infection, and cause cell death. The mechanism of cell death can be quite gruesome: cell lysis, an explosion caused by the breakdown of the the outer covering of cells, and apoptosis where cells essentially commit suicide to save non-infected cells. Viruses are extremely diverse in their genetic make-up, how they replicate, and how they cause infections. Additionally, viruses can quickly accumulate several mutations resulting in viral offspring that are completely different from the parent virus. Therefore, it becomes a Herculean task to design vaccines or treatment procedures that can target viruses. However, not all viruses are evil. There are several studies that demonstrate how viruses can help fend off infections and help us stay healthy. Considering the wide variety of viruses and hosts that they can infect, coupled with the inability of viruses to grow outside a host cell, how were they discovered? 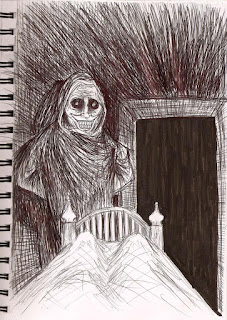 Figure 1: The horrifying house-guest. Although the original artist remains unknown, this drawing is part of a series that describes an unwanted and malicious presence. Source.

As mentioned in a previous blog, vaccination against smallpox, a viral infection, was widespread by the 18th century. However, the causative agent of smallpox remained unknown till the 19th century. The earliest studies of viruses can be traced to Adolf Mayer, a German chemist, who in 1876 was studying an unusual disease that affected tobacco plants, leaving the leaves with a mosaic pattern. In his studies, he had discovered that the sap from an diseased plant could be used to infect a healthy plant. Since he had assumed that bacteria were responsible, he tried to filter them out of the sap. Surprisingly, the filters didn't work and he assumed that the disease was caused by smaller bacteria or toxins. His observations were reproduced in 1892 and 1898 by Dimitri Ivanovsky, a Russian botanist, and Martinus Beijerinck, a Dutch botanist. Although Ivanovsky did not pursue the matter further, Beijerinck believed that he had found a new infectious agent and named it a "soluble living germ". He also reintroduced the name "virus", which was originally coined in 1398 from the Latin name for poison. In 1935, Wendell Meredith Stanley, an American biochemist, discovered that the structure of the tobacco mosaic virus (TMV) was a crystalline protein. His techniques enabled the characterization of other viruses, resulting in the understanding of several diseases such as foot-and-mouth disease, yellow fever, polio, and influenza. 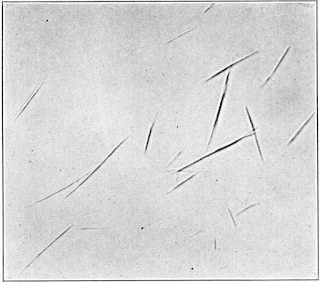 Figure 2: The needle shaped TMV virus that Stanley had observed during his experiments. Stanley later received the Nobel Prize in Chemistry in 1946, along with James Sumner and John Northrop, for their studies on the purification and crystallization of viruses.  Source.

How do viruses multiply in number if they can only do so in living cells? Viruses first attach to the cell surface of the host cells and then enter the host in different ways- some inject their genetic material into the cell, while others can be taken up whole by the cell. In the latter case, the viruses are stripped of their protein coat and their genetic material is released into the cell. The virus can now use the host cell machinery to drive the production of viral proteins, which are then assembled to make complete viruses. These are then released either by rupturing the cell or by budding off from the cell membrane. In the case of bacteriophages, viruses that infect bacteria, they can either destroy the host cell by rupturing the membrane and releasing the viral particles, or they can integrate their genetic material with that of the hosts' thereby allowing the bacteria to live and reproduce normally. In the second case, each time the bacteria replicate, a copy of the viral genetic material is transferred to the daughter cells. 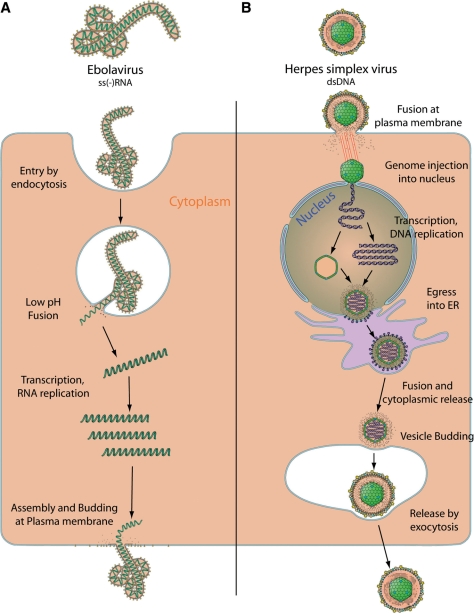 Figure 3: An example of the diversity in viral form and replication. The Ebolavirus has a single strand of RNA that serves as a genetic template. The virus is taken up whole, the viral genetic material serves as a template in the cell cytoplasm for new virus assembly, and the new viruses escape the cell by budding off the cell membrane. In contrast, the Herpes virus has double-stranded DNA that it uses as a template. The virus uses a different mode of entry- it fuses with the cell membrane and then injects its genetic material into the host nucleus instead of replicating in the cytoplasm. The new formed viruses also have a different means of release- by exocytosis instead of budding. Source.

The outcome of a viral infection depends on whether the host has encountered the virus previously, which host cells are targeted, and how strong the host immune system is. As mentioned in my previous blog, vaccines such as MMR and flu shots can help expose the host to the virus in a controlled manner. Therefore, if the host is subsequently exposed to infectious doses of the virus, it can mount a stronger immune response. Interestingly, some viruses, such as the influenza virus, can undergo mutations at a faster rate in order to evade the immune system. This is why new versions of the flu shot are developed twice a year. Different viruses target different host cells: influenza virus infects the respiratory tract, hepatitis viruses attack the liver, poliovirus destroys motor neurons in the central nervous system. When viruses target these cells, the body mounts several defensive strategies which include fever, rash, and inflammation. Furthermore, due to the nature of virus replication, they can damage the host cells leading to devastating consequences. For example, infection by HIV destroys several types of immune cells, and when these cell numbers fall below a critical level, the individual becomes susceptible to a wide range of infections.

Although viruses can be deadly, not all viruses are bad. There is a growing body of evidence that suggests that viruses play a crucial role in maintaining the gut flora. For example, bacteriophages line the mucous membrane in the guts of several hosts, forming the first line of defense against invading bacteria that use the mucous membranes as a point of entry. The hepatitis G virus neither benefits nor harms healthy humans. However, the same virus in HIV-positive patients slows the progression of the disease by several mechanisms including the reduction of HIV replication. The human gut is rich in viruses and bacteriophages, the identities and functions of many are still being discovered. However, their presence implies that they confer a benefit to their hosts. Amazingly, our genetic material contains 8% of viral genetic material, the incorporation of which has taken millions of years. Although the biological significance of most of these viral sequences are unknown, studies have shown that at least some of them encode proteins that are essential for placental development. 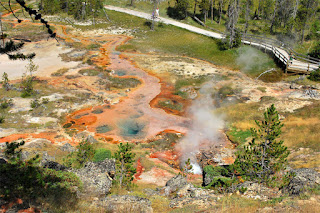 Figure 4: "Artists' Painpots" of Yellowstone National Park. Very few plants are able to withstand the temperatures of these geothermal soils. However, the tropical panic grass which requires a symbiotic relationship between the plant, a fungus, and a virus, can grow in these soils that routinely see temperatures above 50 °C. Source.

Given the diversity in viral structure and genetic material the question arises-how did viruses come to be? Tracing their origins is difficult for several reasons- viruses don't form fossils, they can insert their own genes into the organism they're invading thus making it difficult to untangle the host genes from the viral ones, and they can infect all organisms. However, there are several hypotheses, though none of them can satisfactorily explain the origin of all viruses. The first hypothesis, known as the progressive hypothesis, is that viruses could have originated from mobile genetic elements. These elements could have utilized some structural proteins to envelop themselves thereby allowing them to move from one cell to another. The second hypothesis, the regressive hypothesis, states the opposite- viruses were initially complex and gradually lost their genetic information, resulting in formation of a parasite that contained the bare minimum information required to cause an infection. The third hypothesis, also known as the virus-first hypothesis, states that viruses existed before cellular life, they were the first replicating entities and gradually became more complex to give rise to life as we know it.