A glass of sparkling water please!

Carbonated water is known by many names- soda water, club soda, seltzer water, fizzy water, and sparkling water. It forms the backbone of all the carbonated beverages, several cocktails, and is becoming increasingly popular in cooking where it is used to provide a lighter texture to doughs and batters. The uses of club soda also extend beyond gluttony; it is used as a stain remover despite there being no scientific basis for why it would be superior to ordinary water. So what is carbonated water and how was it discovered?

Artificially carbonated water was first made in 1750, by a French chemist Gabriel François Venel. He had observed the effervescent water of the Selz river in Germany. He attributed the effervescence to the escape of common air, which he called "superabundant air". In an attempt to replicate this phenomenon, he combined hydrochloric acid (HCl) and soda (NaHCO3) to produce carbonated water resulting the following reaction:

The other byproduct of the reaction is sodium chloride (NaCl) that we know as table salt.

It was only in 1754 that a Scottish chemist Joseph Black characterized the air bubbles as carbon dioxide. He passed the gas through lime (Ca(OH)2), which produced a precipitate of calcium carbonate (CaCO3): 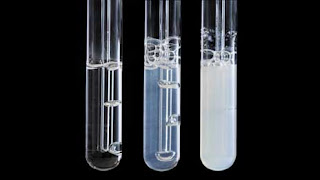 
In 1767, an English chemist Joseph Priestly discovered how to produce drinkable carbonated water. He utilized the fact that carbon dioxide is released as a byproduct during the production of beer; he  suspended a bowl of water over a beer vat at a local brewery, which impregnated the water with carbon dioxide. Priestly realized that the resulting water had a pleasant taste and could be offered as a refreshing drink. In 1772 he developed an apparatus to do the same. He used sulfuric acid (H2SO4) and chalk (CaCO3) to generate carbon dioxide which was then dissolved in an agitated bowl of water: 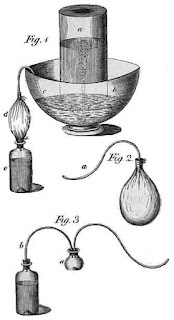 Figure 3: Directions for producing carbonated water in Joseph Priestly's book Impregnating Water with Fixed Air. The procedure involved using a glass vessel (labelled "a" in Figure 1) that was inverted into a bowl of water "b". Pipe "c" connected the bowl to a bladder "d" which was fit into a phial "e". Initially the phial was filled with chalk and water. Sulfuric acid was then added to this mixture in small amounts. Once the effervescence started, the phial was stoppered, and the carbon dioxide released passed through the pipe and into the water in the inverted glass vessel. Source.

J. J. Schweppe, a Swiss watchmaker, improved on Priestley's method and developed the first practical method to manufacture carbonated water on a large scale. This led to the founding of the Schweppes company in 1783. He also tried to move the business to London but was unsuccessful. However, the drink was later popularized by Erasmus Darwin, the grandfather of Charles Darwin, and by King William IV of the United Kingdom who adopted the beverage with the Royal Warrant of Appointment.

The bottles containing carbonated beverages were usually sealed with a cork. The main disadvantage of using a cork was that the bottles could not be stored upright- the corks had a tendency to dry out and shrink thereby allowing the gas to be released and causing the bottle to "pop". Therefore these bottles were stored on their side, which prevented the corks from drying out. Furthermore, it was difficult to open the bottles by hand; a fact that was wonderfully depicted by the British painter William H.H. Trood.

To circumvent the problem of using corks, in 1872 a British soft drink maker Hiram Codd designed the Codd-neck bottle to store carbonated drinks. The neck of the bottle enclosed a marble and a rubber gasket. These bottles were then filled upside down with the carbonated beverage and the pressure of the gas forced the marble up, thereby sealing in the carbonation. The bottle also contained a chamber into which the marble was pushed to open the bottle. This prevented the marble from blocking the neck of the bottle as the drink was poured. However, the design had an unsanitary disadvantage that lead to a decline in it's popularity- people would generally use their fingers to push down the marble. 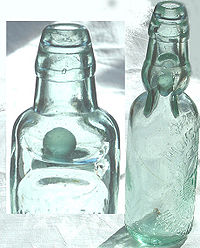 Another improvement in bottle design took place in 1874 when an American inventor Charles de Quillfeldt invented the flip-top bottle. The mouth of the bottle was sealed by a stopper, fitted with a rubber gasket, and held in place by a set of wires. This allowed the bottle to be opened and resealed repeatedly without the use of a bottle opener. 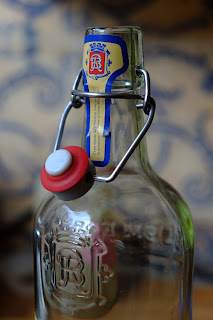 Figure 6: The top of a flip-top bottle. Source.

The pièce de résistance in the manufacturing of bottle caps was the invention of the crown cork in 1892 by the American engineer William Painter. He also invented bottle openers to enable the removal of these metal bottle caps. The crown cork bottle stopper allowed the soda bottles to be stored standing upright.

What's in a name?