Hiking in the Sierra Nevada

I live in central Illinois, which is characterized by low and flat terrain. When I say flat I mean picture standing on a beach and looking at the ocean's horizon except there is no beach, no ocean, and instead you have fields of corn and soy. Therefore, when I was looking for a change of scenery I immediately thought of California. In contrast to the Midwest, California contains rolling hills and mountains; the majority of the Sierra Nevada (meaning snowy saw range) lies in this state. The rock foundations of the Sierra were formed during the Mesozoic era, about 180 million years ago, when dinosaurs were in vogue. At the time, volcanic eruptions led to the deposition of molten rock deep within the earth resulting in the formation of granite, a term that triggers intense nostalgia because I last heard it during sixth grade. What is granite? It is a coarse grained rock that is formed when magma solidifies underground and it is particularly rich in silicon and oxygen. Granite is hard and tough, which is why it has been historically used as a construction stone. 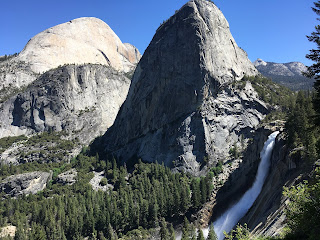 Granite galore: Liberty Cap beside Nevada Falls in Yosemite National Park.
How high did I hike to take this picture you ask? A cool 4.5 km with an elevation gain of 610 m.

The impressive granitic structures in the Yosemite are due to two distinct geological phenomena: uplift of the underlying rock bed, and erosion due to glaciers and rivers forming smooth rock faces. About 65 million years ago, the underlying bed of granite that had been deposited during the Mesozoic era started finding its way upwards resulting in the formation of a lowland. This area was further uplifted and tilted to the southwest, which increased the gradient of streams that were flowing towards the valley. These fast flowing streams cut deep canyons into the mountain block. The second agent of erosion, the glaciers, became major players 2-3 million years ago. By then the Sierra Nevada had risen high enough for glaciers to form periodically. Glacial ice moved down and converted the V-shaped canyons, which were moulded by the rivers, to U-shaped valleys. 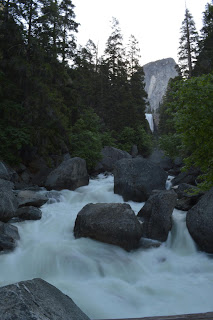 Vernal Falls.
See that granite dome in the background? That's Liberty Cap! These falls are a part of the Merced river, which is the primary watercourse flowing through the Yosemite Valley. The Mist Trail, which is next to the river, goes past Vernal Falls to Nevada Falls. As the name suggests, mist from the waterfalls blankets the trail. Not a bad way to wake up when you start a hike at 7 am.

South of Yosemite National park lies another glacier-carved valley which contains the Sequoia and Kings Canyon National Parks. These parks are home to extensive groves, forests, rugged peaks, and swift rivers. In fact, John Muir called Kings Canyon a rival to Yosemite because of it's incredible beauty. The valley has the distinction of being the deepest canyon in the U.S. and has been carved by Kings river whose Middle and South forks begin in the Kings Canyon National Park. The vast majority of this area is roadless wilderness, accessible only by foot or horseback (anyone up for a few months of backpacking?). For the less adventurous visitors, the accessible areas of the park afford breathtaking views of giant sequoias, aptly named Sequoiadendron giganteum. These trees have the distinction of being the world's largest living things by volume. Along with these behemoths, the park is also home to the California redwoods, Sequoiadendron sempervirens, close cousins of the giant sequoia trees. Not to be outdone by the sequoias, the redwoods hold the title of the world's tallest trees.

Wooden skyscraper- a California redwood.
Due to their giant size, transporting water to the top of these trees becomes extremely difficult. Therefore, the leaves directly take in fog water from the surrounding air and create artificial rain when the fog that collects on the leaves drips to the forest floor.

Both these gigantic trees also have astoundingly long lifespans. The oldest known redwood is about 2,200 years old. Hence the name "sempervirens" which means everlasting in Latin. The giant sequoias are among the oldest living things on Earth, the oldest tree clocking in at 3,500 years. How do these trees attain such long lifespans when their forests are regularly ravaged by fires? In case of redwoods, their bark is fire resistant and grows to at least a foot thick. Furthermore, even if there is fire damage, the trees can easily sprout new branches or even new buds from the base of a killed parent tree (petition to name them phoenix trees?). Sequoia trees go a step further- they have fire resistant bark and they take advantage of forest fires for seed release. Fire brings hot air into the canopy, which dries the cones and causes them to immediately open and release large quantities of seeds. Furthermore, the fire creates optimal seedbed conditions and the ash acts as a protective cover for the seeds. Forest fires also clear the competing vegetation allowing the seedlings to get sunlight. Therefore, the National Park Service allows for controlled burning of these groves to help these trees prosper. 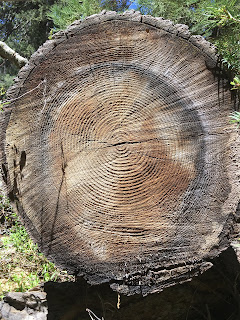 Put a ring on it.
Horizontal cross sections of trees reveal growth rings that are made due to the addition of new cell layers. One ring usually represents a year and also indicates the climatic conditions in which the tree grew; adequate moisture results in wider rings whereas droughts cause narrow rings.

Although I could only stay at these National Parks for two days, I cannot overstate how incredibly beautiful they are. Yosemite with its imposing granite domes is an exquisite challenge to any hiker or rock climber, not to mention the dizzying number of waterfalls that can be seen driving around the park. Although Sequoia and Kings Canyon National Parks lie just 180 km south of Yosemite, there is a marked difference in scenery. Unlike Yosemite, the canyon walls are a combination of granite and limestone. The steep roads that cut through these ragged cliffs offer a spectacular view of the winding Kings river. The view from the valley is also magnificent: mixed-conifer forests as far as the eye can see. Just one warning: the groves of giant trees will give you the happiest neck sprain you've experienced. 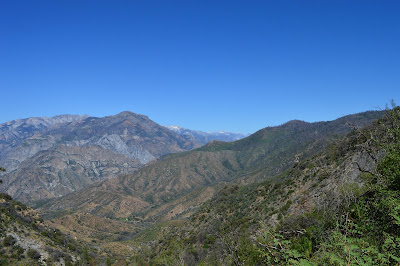 The hills are alive with the smell of conifers. Seriously though, how beautiful is Kings Canyon?