What in the world do defibrillators do?

There is chaos in the hospital room. The sound monitors are beeping furiously with lines that resemble Trump's signature. Suddenly the lines go flat. Doctors are yelling out "The patient's heart has stopped! Get me a defib!" A cart is rushed in. Paddles are out. A doctor places the paddles on the patient's chest and screams "CLEAR". The patient's body seem to seize and then relax. The jumpstart works and the monitor lines go back to normal. The beeping stops. Someone remarks "Phew! That was a close one." This scene is staple in every medical drama I have ever watched. Although I cannot attest to whether the situation plays out like this in real life, I am always left wondering- how did the paddles save that person's life?

To understand how those paddles work, it is important to first understand how the heart functions. More specifically- what causes the heart to beat? The contraction of heart muscles are caused due to electrical currents. These currents are propagated across the surface of the heart through its electrical conduction system. The main player of this system is the sinus node, also known as the heart's pacemaker. The cells in the sinus node are unique- they can spontaneously produce electrical impulses. These impulses set the heart rate, which can vary between 60 to 100 beats per minute. 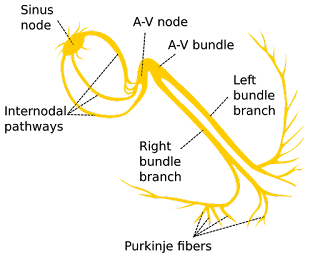 Figure 1: The electrical conduction system of the heart. The signal that is generated by the sinus node travels to the AV node and is disseminated across the heart through the bundle branches, thereby causing contraction of the heart muscles. Source.


These electrical signals are produced by the flow of positively charged calcium ions and potassium ions. When the cells are at rest, they maintain a negative voltage. When they are stimulated, calcium ions enter the cell, which reduces the negative charge inside the cell. This decrease causes muscle contraction, after which potassium ions exit the cell restoring the negative charge. It is these electrical signals that are detected by the electrocardiograph machines (the ones that play such a dramatic role in medical TV series).

Dysfunction in the propagation of electrical signals result in a variety of disorders, which are collectively called arrhythmias. Broadly, the disorders can be categorized as heartbeats that are irregular, too fast, or too slow. These abnormalities can remain asymptomatic or manifest themselves in the form of heart palpitations, dizziness, or in extreme cases cardiac arrests. However, there are various methods to treat arrhythmias: medications, inserting artificial pacemakers, surgery, and using controlled electric shocks via defibrillators.

The effect of electricity on the heartbeat was first demonstrated in 1899 by two physiologists, Jean-Louis Prévost and Frédéric Batelli. They had discovered that electrical shocks could change the heartbeat rates in dogs. The external defibrillators that we use today were invented in 1930 by William Kouwenhoven, an American electrical engineer. Sadly, the first demonstration of these machines were also carried out on dogs. However, he also proved that defibrillators worked on humans when he used them during open heart surgery on a 14-year old boy. Furthermore, till the 1950s the only way to use defibrillators was by opening the chest cavity during surgery.

The portable machines that we now use today are usually automated external defibrillators (AEDs). These devices contain electrode pads that can be placed on the chest of the victim. The added advantage of these machines are that they can automatically diagnose the heart rhythm and decide whether an external electric shock is required. If required, they automatically administer the shock. So when are these machines used? Defibrillation is only used in very specific instances- when the heart has chaotic electrical signals, also known as fibrillation. The electric current therefore shocks the heart into working normally again. However, it is not used when a person's heart stops completely. So the next time you see a TV series use a defibrillator on a patient whose heart's signal is a flatline, feel free to show off your medical knowledge. 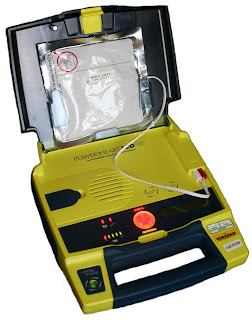 Figure 2: An AED. Note the attached electrode patches. Fun fact: In Australia, portable defibrillators are known as "Packer Whackers" because Kerry Packer, a media mogul, donated a large sum of money to equip every ambulance with one. Source.